Find me a find, catch me a catch. This was the name of the PR All-Stars game for this week. Alyssa announced that the designers would be designing looks for Match.com singles who were going on a first date. So while Match.com was matching singles, PRAS was matching designers. That’s right — team/pair challenge. And it was last week’s winner Sonjia who got to play matchmaker.

Sonjia picked Dmitry for herself. They would be working with 1st date duo Helen and Craig. Sonjia then paired Fabio and Jay together, who would be working with the only same sex pairing, Bryce & Tarek. Next up, Samantha and Michelle, working with singles Raquel & Arvind. And finally, Justin and Helen, who would be dressing Becca and John. This challenge was definitely a quick one, with barely a day to create these looks as the dates were that night! Yikes! There was a great incentive though as the winner would receive a pampered prize pack with a luxury spa day for 2! For the most part, the designer pairs worked seamlessly well and even the dating pairs all seemed to have had a nice time.

With a $300 budget in tow, to divvy as each designer pair saw fit, the designers were then off to Mood. Not much drama came about with this challenge, except for the Samantha/Michelle pairing. Michelle was very adamant that she was not a menswear designer and was quite vocal about how unfair the set-up was. I’m not sure why, but couldn’t the designer pairs have tackled both looks together, instead of each working on only 1 look? Maybe there wasn’t time to divide the workload that way, but Michelle ended up working solo on the menswear look. It seemed as if she would be in store for a major downfall and possible elimination this week. She was even sick on top of being crazed over having to do menswear. In fact, I wasn’t sure if she was actually sick or if this challenge was making her sick.

Zanna came by for her visits, making sure the designers kept in mind these clients were real people who would be going on real dates. Another nice touch for these 1st date couples was that Biosilk would be providing hair care services for the actual dates and the runway show. After the dates, the pairs joined their designers for the morning of the runway, regaling of how well their dates had gone. It seemed as if we were in for a tough runway because everyone loved their looks. But this week the judges’ panel was adding a little sass via guest judge OITNB star Laverne Cox, so I had no doubt the judges would critique, and critique they did!

The judges critiqued each look. And because I felt one designer pairing was not given enough praise, I will gladly discuss each look as well! I will start with Dmitry & Sonjia because I was baffled at how their looks were just SAFE! Puhhhhh-LEASE!

I guess since there was technically a winning and losing pairing, maybe that had some bearing on keeping Sonjia out of the running for the win. But it seemed even if she had been judged solo and not a group score, the judges still were not all loving this bold turquoise look. Although I never think the judges are on the same page. But the panel seemed divided over the midriff cutout. I don’t get why though. The cut-out, the details on the bodice, that’s what made this look. If that cutout were not there, this look would have been a bore like some of the other pieces we saw this week.

I applaud Sonjia for creating a bold piece. Some of the other looks were not all that special and at least she put some true designer effort into her work. I also love that she made use of such a great color choice. She was really trying to make her girl standout! This piece had just the right amount of sexiness to it. Sonjia struck a great balance.

I didn’t peg Dmitry for a win this week, but I thought he did a superb job in tackling his menswear pieces. His pants were the only ones that fit well. I’m not sure why or how Laverne loved Justin’s menswear pieces more than this. Oh wait, I think she was distracted by the male model, not the clothes. Because had she been focused only on the look, Dmitry by far did a more superior job.

I’m not sure what bells and whistles the judges were wanting for a hetero-male first date look. But of all the menswear pieces, Dmitry had one of my more fave looks. I liked Jays’ a bit more for menswear in general, but if I were looking for what I would want my man to wear, it would be more akin to what Dmitry designed. And I think he really did add some special touches to this sweater to make it more than just an ordinary, average sweater.

My next fave pairing, the judges top pairing, was Jay & Fabio. I think what likely kept Jay from the win was maybe the jeans, they were a bit ill-fitting. But for the judges, I think they wanted to award Fabio for his risk-taking design. But Jay put in just as much design effort with this jacket. And even in baby pink, it works for man! Very happy he did the sleeves in grey though, smart move Jay!

Menswear is a bit more difficult to tackle in such a short time-frame. And for Jay, he clearly didn’t want to rest on his laurels. He wanted to do more than a shirt and a pair of pants. And he did by also making a jacket. With a bit more time, Jay’s look could have been so much better, but what he did in the time he had was amazing!

My winner for the week was Sonjia, but based off this winning duo the judges picked, I see why Fabio’s look made the most sense for the win. I don’t think every man would love this look, it’s very stylized and just wouldn’t work for every man.

I even remember the judges saying they thought of scrubs when looking at this look so I’m still not sure this win made the most sense. But what was nice to see was that this look was very Fabio. He was the designer this week that I could see the aesthetic translate from womenswear to menswear. Both Jay & Fabio did great work with their menswear pieces, very fashion forward and fashionable. And yes, men can be fashionable too!

So oddly enough, with the Michelle/Samantha pairing, it was Samantha who ended up with the worse-off look.

Michelle was able to tackle her fears and somehow salvaged a workable look. Michelle’s look was not perfect, but the top was quite intriguing. The zipper details created for some special touches. I had 2 main issues with this look. One, both the top & the pants shouldn’t have been so loose. And second, the pants didn’t fit quite right. The judges’ focus was on the ankle area, but mine was on the crotch. Needless to say, they needed some more work.

Michelle isn’t a menswear designer though, so with that in mind, she did an okay job.

But it was Samantha who was saved by what I am guessing was a higher group score, keeping her safe from elimination. I think had the judges just been scoring these looks as solo pieces, Samantha would have joined Helen in the bottom 2. I can’t believe this is all Samantha came up with for this challenge. Even making use of a crop top, this look had nothing sexy about it at all. And that’s surprising because Samantha is a sexy urban designer. 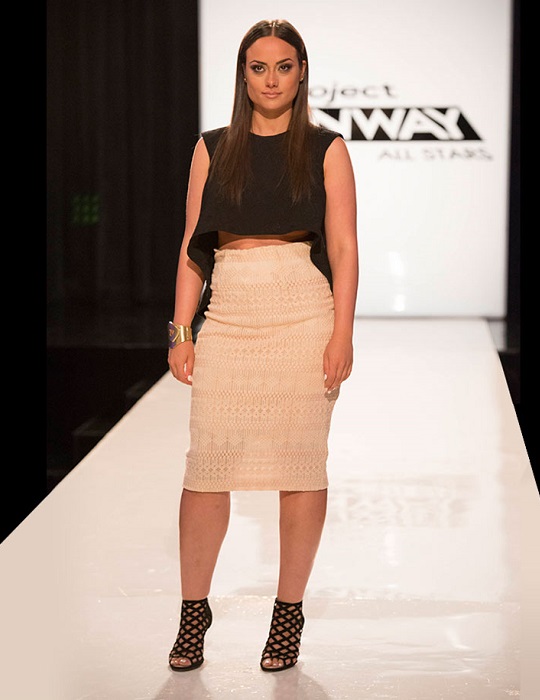 The judges focused on the crop top, namely the boob-issue. But the skirt could have used some focus as well. It was way too long and was very boring. Helen & Justin might have been given a second chance since no one went home this week, but Samantha was given another chance here too.

This left Justin/Helen as the bottom pairing for the week, although in an anti-climactic decision, no designer went home. PRAS is taking a holiday break, so in a sense, I guess this was a timely gift for both designers.

I’m not sure who the judges would have ultimately sent home. My guess would be Justin because the judges seem to love what Helen does way more. They also found some saving graces with her separates look this week, as did I. The front angle was god awful here though. I agreed with the judges, very pajama-like and it made this beautiful woman look so much larger. And no one wants to look bigger!

But the shorts were a nice touch, something different and what a woman might wear to look super-sexy for a first date. The open-back was also gorgeous. And again, what likely would have saved Helen from elimination this week had the judges actually sent someone home.

Helen wanted to initially design the menswear pieces, but Justin thought he was rescuing Helen and doing her a favor since he has done menswear before. But Justin didn’t do much after making the decision to design a menswear look. He created a shirt and a pair of pants. Nothing special, nothing unique. You could find this anywhere. And I know his guy said he loved J. Crew, but that doesn’t mean you should settle. Just like with Samantha’s client. She said she loved crop tops, but that doesn’t mean if you can’t execute one you should just do it to do it. As a designer, you have to listen to what your client wants, but also infuse your design aesthetic. Justin didn’t do that here.

There was even some execution issues to top off Justin’s lack of design. The pants were too tight and Justin’s client even said the shirt didn’t fit right. But again, I believe menswear is way harder to do in this sort of atmosphere, such short time frames. It’s very rare on PR we ever see well-executed menswear pieces. But if you are going to do it, you need to do more than this!

So remember, PRAS is off next week, Happy Holidays!